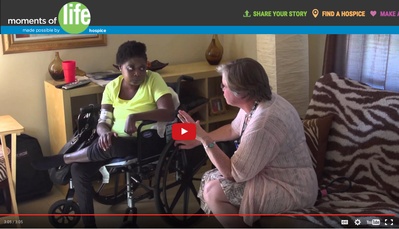 Deadra Gladden does not feel defined by illness anymore.  But that wasn’t always the case.  This 28-year-old from New Jersey has battled lupus for half of her young life.  The auto-immune disease put her in the hospital multiple times.  Deadra’s kidneys failed, she needed heart valve replacement surgery and eventually, she suffered a stroke.

In May of 2014, Deadra’s fight was becoming too much to bear.   She was back in the hospital, feeling hopeless, and in excruciating pain.   She was also grieving the loss of her sister, Danielle, who died from the same disease in 2013.

Deadra’s doctors told her family it was time to call hospice.  But after a consult with a nurse from Samaritan Healthcare and Hospice, a palliative care team was brought in instead. While lupus can’t be cured, it can be managed with the right treatments.

Dr. Stephen Goldfine and Dr. Marianne Holler worked closely with Deadra to identify which treatments would work best to manage her pain.  They helped her recognize that anxiety was worsening many of the symptoms she was feeling.

With proper symptom management and emotional support from Samaritan, Deadra has gotten her life back.  “Samaritan’s palliative care gave me a second chance,” she says.  Deadra left the hospital, her spirits lifted and her mind set on living life to the fullest.

symptoms and manages her care plan. Though she still requires physical therapy and dialysis, Deadra is able to take part in some of life’s most precious moments.   She spends times with her family including her beloved nieces and nephews.  She is an active member of her church and she’s even writing a book!

With the support of palliative care, Deadra is able to write about the joys in life because she’s able to experience them again.  She credits Samaritan Healthcare and Hospice for allowing her to feel like a person.  She says, “They listened and saved my life!”